As the new season looms let’s have some end of season reflection. Although last year was a bit up and down, we finished the season strongly and ended up with a healthy profit.

We were a bit unlucky with our season long picks, with Clyde getting docked 4 points because Betty the part time helper forgot to post some bit part players registration to the SFA beaks in time. All been done before but since it is Clyde in the second division the SFA took the opportunity to boost their egos by docking Clyde a huge 4 points which ultimately cost Clyde the title. However Arbroath at 8/1 still saw us get a decent return there.

On to the meat on the bone though – the weekly picks. Over the course of the season we made 338 picks with 163 winning selections. The below graph shows the number of points profit per month – as you can see we were very up and down, doesn’t really tell us that much but shows the volatility of gambling. The red line shows net profit, which is after Betfair take their commission. 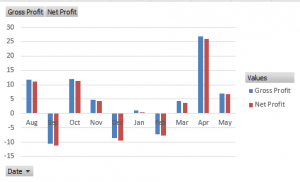 More insightful is the accumulative profit over the course of the season: 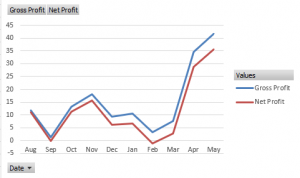 Although a bleak winter, this shows a brighter picture by season end where we finish 41 points up due to a strong spring, particularly in April. So if we started with a bank of 100 pounds and put on a pound for every point then we’d see our investment rise £41 to £141.

This equates to an ROI per bet of roughly 12%. Happy as a wee pig in shit with that score. Is this sustainable for another season? Well, if we’re honest 338 games is probably still a small sample and maintaining an ROI of 12% is going to be extremely difficult next season… we’ll settle for anything over half that…

Lastly, see below for the progressive ROI and then the table of results. 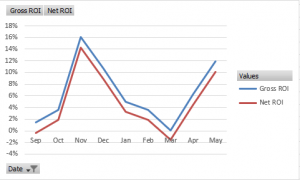 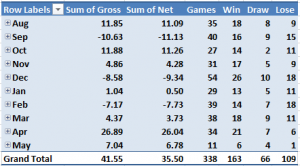